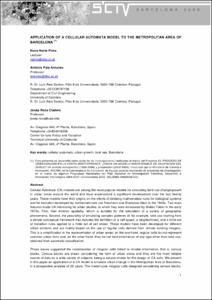 Document typeConference report
PublisherCENTRE DE POLITICA DE SOL I VALORACIONS (CPSV)
Rights accessOpen Access
Abstract
Cellular Automata (CA) models are among the most popular models for simulating land use change/growth in urban areas around the world and have experienced a significant development over the last twenty years. These models have their origins on the efforts of devising mathematical rules for biological systems and for evolution developed by mathematicians von Neumann and Stanislaw Ulam in the 1940s. Two main features made CA interesting for urban studies, to which they were introduced by Waldo Tobler in the early 1970s. First, their intrinsic spatiality, which is suitable for the simulation of a variety of geographic phenomena. Second, the possibility of simulating complex patterns of, for example, land use starting from a simple conceptual framework that includes the definition of a cell space, a neighborhood, and a finite set of transition rules applied to a finite set of cell states. These models have been developed for different urban contexts and are mainly based on the use of regular cells derived from remote sensing imagery. This is a simplification in the representation of urban areas: on the one hand, regular cells do not represent common urban form and, on the other hand, they do not held information of any type other than land use, obtained from automatic classification. These issues suggested the consideration of irregular cells linked to reliable information, that is, census blocks. Census blocks are drawn considering the form of urban areas and they are the most reliable source of data on a wide variety of subjects, being a natural choice for the design of CA cells. We present in this paper an application of a CA model to simulate urban change in the Metropolitan Area of Barcelona, in a prospective analysis of 20 years. The model uses irregular cells designed considering census blocks. We describe the main features of the model and the calibration process, as well as the simulation results. We also discuss some new features that are the core of our current research on CA.
CitationPinto, N.; Antunes , A.; Roca, J. Application of a cellular automata model to the metropolitan area of Barcelona. A: Congreso Internacional Ciudad y Territorio Virtual. "5th International Conference Virtual City and Territory". Barcelona: CENTRE DE POLITICA DE SOL I VALORACIONS (CPSV), 2009, p. 1-14.
URIhttp://hdl.handle.net/2117/12500
ISBN97884-8157-601-6
Publisher versionhttp://www.upc.edu/cpsv/
Collections
Share: