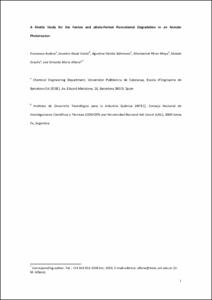 Except where otherwise noted, content on this work is licensed under a Creative Commons license : Attribution-NonCommercial-NoDerivs 3.0 Spain
Abstract
A kinetic model describing Fenton and photo-Fenton degradation of paracetamol (PCT) and consumption of hydrogen peroxide (H2O2) was proposed. A set of Fenton and photo-Fenton experiments (18 runs in total) was performed by fixing the initial concentration of PCT to 40 mg L-1 and varying the initial concentrations of H2O2 and ferrous ion, Fe2+. The experimental set-up was a well-stirred annular photoreactor equipped with an actinic BL TL-DK 36 W/10 1SL lamp. Experimental results highlighted that PCT is no more detected by HPLC analysis within a minimum reaction time of 2.5 and a maximum reaction time of 15.0 min. Besides, a maximum conversion of total organic carbon (TOC) of 68.5% was observed after 75 min of reaction in case of using UV radiation and the highest concentrations of the Fenton reagents. The experimental data were used to fit the kinetic model. The radiation field inside the reactor was taken into account through the local volumetric rate of photon absorption, evaluated by assuming a line source model with spherical and isotropic emission. The kinetic parameters were estimated by using a non-linear least-squares regression procedure and root mean square errors (RMSE) were calculated in order to validate the feasibility of the proposed model. A good agreement between experimental and predicted data was observed and the lowest values of RMSE resulted in 5.84 and 9.59% for PCT and H2O2 normalized concentrations, respectively.
CitationAudino, F., Conte, L., Schenone, A., Pérez-Moya, M., Graells, M., Alfano, O. A kinetic study for the Fenton and photo-Fenton paracetamol degradation in an annular photoreactor. "Environmental science and pollution research", 18 Setembre 2018, vol. 26, núm. 5, p. 4312-4323.
URIhttp://hdl.handle.net/2117/124949
DOI10.1007/s11356-018-3098-4
ISSN0944-1344
Publisher versionhttps://link.springer.com/article/10.1007%2Fs11356-018-3098-4
Collections
Share: