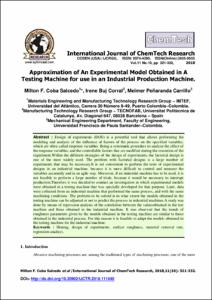 Except where otherwise noted, content on this work is licensed under a Creative Commons license : Attribution-NonCommercial-NoDerivs 3.0 Spain
Abstract
Design of experiments (DOE) is a powerful tool that allows performing the modeling and analysis of the influence of factors of the process on the specified variables, which are often called response variables. Being a systematic procedure to analyze the effect of the response variables, and the controllable factor s that are modified during the execution of the experiment.Within the different strategies of the design of experiments, the factorial design is one of the most widely used. The problem with factorial designs is a large number of experiments that may be ne cessary.It is not convenient to perform the tests of experimental designs in an industrial machine, because it is more difficult to control and measure the variables accurately and in an agile way. Moreover, if an industrial machine has to be used, it is n ot feasible to perform a large number of trials, because it would be necessary to interrupt production.Therefore it was decided to conduct an investigation in which experimental models were obtained in a testing machine that was specially developed for tha t purpose. Later, data were collected from an industrial machine that performed the same process, and with the same machining conditions. The problem to be solved is to what extent the models obtained in the testing machine can be adjusted or not to predic t the process in industrial machines.A study was done by means of regression analysis of the correlation between the valuesobtained in the test machine and those obtained in the industrial machine. It was observed that the trends of roughness parameters gi ven by the models obtained in the testing machine are similar to those obtained in the industrial process. For this reason it is feasible to adapt the models obtained in the testing machine for the industrial machine
CitationCoba, M., Buj, I., Pearanda, M. Approximation of An Experimental Model Obtained in A Testing Machine for use in an Industrial Production Machine. "International Journal of ChemTech Research", 2018, vol. 11, núm. 10, p. 321-332.
URIhttp://hdl.handle.net/2117/124911
DOI10.20902/IJCTR.2018.111040
ISSN0974-4290
Publisher versionhttp://www.sphinxsai.com/2018/ch_vol11_no10/3/(321-332)V11N10CT.pdf
Collections
Share: