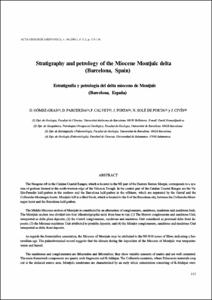 Calvet Rovira, Francesc
Porta Casanellas, Jaume
Solé de Porta, Núria
Civis Llovera, Jorge
Document typeArticle
PublisherConsejo Superior de Investigaciones Científicas (CSIC)
Rights accessOpen Access
Abstract
The Neogene rift in the Catalan Coastal Ranges, which is located in the NE part of the Eastern Iberian Margin, corresponds to a system of grabens formed at the north-western edge of the Valencia Trough. In the central part of the Catalan Coastal Ranges are the Vallès - Penedès half-graben in the onshore and the Barcelona half-graben in the offshore, which are separated by the Garraf and the Collserola-Montnegre horsts. Montjuïc hill is a tilted block, which is located to the S of the Barcelona city, between the Collserola-Montnegre horst and the Barcelona half-graben . The Middle Miocene section of Montjuïc is constituted by an alternation of conglomerate, sandstone, mudstone and marlstone beds. The Montjuïc section was divided into four lithostratigraphic units from base to top: (1) The Morrot conglomerate and sandstone Unit, interpreted as delta plain deposits; (2) the Castell conglomerate, sandstone and mudstone Unit considered as proximal delta front deposits; (3) the Miramar marlstone Unit attributed to prodelta deposits; and (4) the Mirador conglomerate, sandstone and mudstone Unit interpreted as delta front deposits. As regards the foraminifera association, the Miocene of Montjuïc may be attributed to the N9-N10 zones of Blow, indicating a Serravallian age. The palaeobotanical record suggests that the climate during the deposition of the Miocene of Montjuïc was temperate-warm and humid. The sandstones and conglomerates are litharenites and lithorudites; they show variable amounts of matrix and are well cemented. The main framework components are quartz, rock fragments and K-feldspar. The Collserola mountain, where Palaeozoic materials crop out is the deduced source area. Montjuïc sandstones are characterized by an early silicic cementation consisting of K-feldspar overgrowths, quartz overgrowths, mesoquartz intergranular cement and a microquartz transformation of a former detrital matrix. A surface cementation is considered for these cements in the absence of compaction and the geological setting.
CitationGómez, D., Parcerisa, D., Calvet, F., Porta, J., Solé de Porta, N., Civis, J. Stratigraphy and petrology af the miocene Montjuïc delta (Barcelona, Spain). "Acta geológica hispánica", Gener 2001, vol. 36, núm. 1-2, p. 115-136.
URIhttp://hdl.handle.net/2117/124868
ISSN0567-7505
Publisher versionhttp://revistes.ub.edu/index.php/ActaGeologica/article/view/4787
Collections
Share: