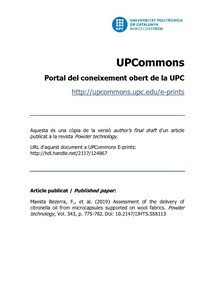 García Carmona, Óscar
García Carmona, Carlos
Murilo Pereira, Moisés
Zanin, Gisella Maria
Faria Moraes, Flávio
Document typeArticle
Rights accessOpen Access
Abstract
Essential oils are complex, volatile liquid mixtures that can be extracted from various parts of plants. Their main characteristics are strong fragrance and biological properties. Studying the characteristics of oils along with the possibility of an interaction with textiles creates new possible uses of this material. However, when oil is applied to a textile substrate, it is necessary to develop an oil release model, while most of the works only explore the application procedure and the fixed oil durability against washes. Thus, this work reports the mechanism and kinetics of controlled release of microencapsulated citronella oil from wool. The microencapsulation was done by complex coacervation with gelatin and gum Arabic biopolymers as shell materials. Optical microscopy, scanning electron microscopy and Fourier-transform infrared spectroscopy were used to confirm the encapsulation. The microcapsules were then supported by foulard in wool, fixed on fabrics and evaluated by attenuated total reflection Fourier-transform infrared spectroscopy. The controlled release of citronella from the microcapsules deposited on the fabric was studied in vitro. The microcapsules formed had a multi-core structure, and when applied to wool they showed diffusion by a Fickian mechanism in the first release stage and on the second stage changed to non-Fickian kinetics. The controlled release indicates that the textile structure influences the release model due to an interaction between fabric and water
CitationMaesta, F., Lis, M., García, O., García , C., Murilo Pereira , M., Zanin, G., Faria Moraes, F. Assessment of the delivery of citronella oil from microcapsules supported on wool fabrics. "Powder technology", 14 Novembre 2018, p. 1-23.
URIhttp://hdl.handle.net/2117/124867
DOI10.1016/j.powtec.2018.11.001
ISSN0032-5910
Publisher versionhttps://www.sciencedirect.com/science/article/pii/S0032591018309057
Collections
Share: