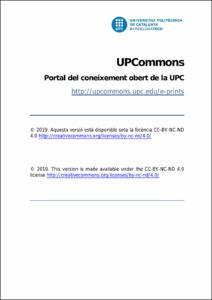 Document typeArticle
Rights accessOpen Access
Abstract
Synthetic jets are produced by the oscillatory movement of a membrane inside a cavity, causing the fluid to enter and leave through a small orifice. The present study is focused on investigating the cooling capabilities of a synthetic jet enclosed between two parallel isothermal plates with an imposed temperature difference. The unsteady three-dimensional Navier-Stokes equations have been solved for a range of Reynolds numbers from 50 to 1000 using time-accurate numerical simulations. A detailed model based on an Arbitrary Lagrangian-Eulerian (ALE) formulation is used to account for the movement of the actuator membrane. All the resulting flows are inherently three-dimensional and dominated by two major vortices, which find their counterparts inside the actuator cavity. A new structure, which is not found in open cavities, appears as an interaction of the synthetic jet flow with the bottom wall and results in a change on the jet's heat transfer mechanisms. Analysis of the outlet temperature has shown that assuming a uniform profile is reasonable if the Reynolds number is high enough, however, the outlet jet temperature is significantly higher than the cold plate temperature. Finally, this study proposes correlations for the heat transfer at the hot wall and the outlet temperature with the Reynolds number, which can be used to account for the cavity effects without the computationally expensive ALE model.
CitationMiró, A., Soria, M., Cajas, J., Rodriguez, I. Numerical study of heat transfer from a synthetic impinging jet with a detailed model of the actuator membrane. "International journal of thermal sciences", 2 Febrer 2019, vol. 136, p. 287-298.
URIhttp://hdl.handle.net/2117/124853
DOI10.1016/j.ijthermalsci.2018.10.017
ISSN1290-0729
Publisher versionhttps://www.sciencedirect.com/science/article/pii/S1290072918306057
Collections
Share: