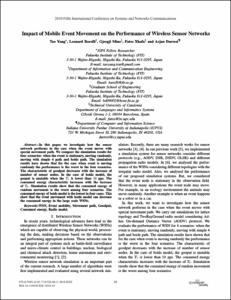 In this paper, we investigate how the sensor network performs in the case when the event moves with special movement path. We compare the simulation results for four scenarios: when the event is stationary, moving randomly, moving with simple 4 path and boids path. The simulation results have shown that for the case when event is moving randomly the performance is the worst in the four scenarios. The characteristic of goodput decreases with the increase of number of sensor nodes. In the case of boids model, the gooput is unstable when the Tr is lower than 10 pps. The consumed energy characteristic increases with the increase of Tr. Simulation results show that the consumed energy of random movement is the worst among four scenarios. The consumed energy of boids model is the lowest in four cases. This shows that the event movement with boids model can decrease the consumed energy in the large scale WSNs
CitationYang, T., Barolli, L., Mino, G., Xhafa, F., Durresi, A. Impact of mobile event movement on the performance of wireless sensor networks. A: International Conference on Systems and Networks Communications. "ICSNS 2010 - 5th International Conference on Systems and Networks Communications, 22-27 Aug. 2010, Nice, France". Institute of Electrical and Electronics Engineers (IEEE), 2010, p. 88-93.
URIhttp://hdl.handle.net/2117/124804
DOI10.1109/ICSNC.2010.19
Publisher versionhttp://ieeexplore.ieee.org/document/5634866/