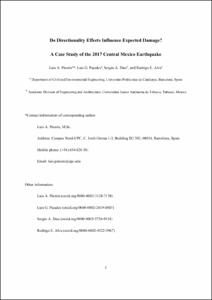 We analyze the case of a building that collapsed in a multifamily complex of Tlalpan borough in Mexico City during the 19 September 2017 Central Mexico earthquake. Despite having similar materials and similar structural and geometric properties, this was the only building that collapsed in the complex. A structural analysis of the building and a study of the soils’ predominant periods indicated that resonance effects, if any, would not be significant. However, phenomena related to the anomalous performance of buildings in dense urban areas such as geological soil, soil–structure interaction, and soil–city interaction effects were also investigated. A detailed analysis of the directionality of seismic actions recorded at nearby accelerometric stations and of the azimuths of sound and damaged buildings indicates that directionality effects were responsible for the collapse of the building. Subsequently, a set of 58, two-component acceleration records of the earthquake was used to perform a thorough directionality analysis. The results were then compared with the foreseen uniform hazard response spectra and the design spectra in the city. Seismic actions in the city due to this earthquake were stronger than those corresponding to the uniform hazard response spectra. In addition, although design spectra have been significantly improved in the new 2017 Mexican seismic regulations, they were exceeded in 11 of 58 analyzed spectra. In 4 of these 11 cases, the design spectra were exceeded due to directionality effects. These results confirm the necessity of considering directionality effects in damage assessments, strong-motion prediction equations, and design regulations.
CitationPinzón, L., Pujades, L.G., Díaz, S., Alva, R. Do directionality effects influence expected damage? A case study of the 2017 central Mexico earthquake. "Bulletin of the Seismological Society of America", Octubre 2018, vol. 108, núm. 5A, p. 2543-2555.
URIhttp://hdl.handle.net/2117/124754
DOI10.1785/0120180049
ISSN0037-1106
Publisher versionhttps://pubs.geoscienceworld.org/ssa/bssa/article-abstract/108/5A/2543/544766/do-directionality-effects-influence-expected?redirectedFrom=fulltext
Other identifiershttps://www.researchgate.net/publication/326881388_Do_Directionality_Effects_Influence_Expected_Damage_A_Case_Study_of_the_2017_Central_Mexico_Earthquake