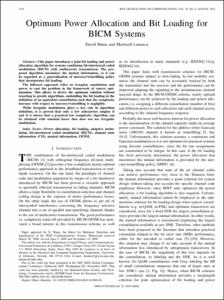 Document typeArticle
Rights accessOpen Access
Abstract
This paper introduces a joint bit loading and power allocation algorithm for systems combining bit-interleaved coded modulation (BICM) with multicarrier transmission. The proposed algorithm maximizes the mutual information, so it can be regarded as a generalization of mercury/waterfilling policy that incorporates bit loading. The followed approach relies on irregular modulation and power to cast the problem in the framework of convex optimization. This allows to derive the optimum solution without resorting to greedy algorithms, embedding the bit loading in the definition of an equivalent constellation such that the complexity increase with respect to mercury/waterfilling is negligible. While irregular modulation plays a key role in algorithm definition, it is proved that only a few subcarriers employ it and it is shown that a practical low complexity algorithm can be obtained with minimal losses that does not use irregular modulation.
CitationMatas, D.; Lamarca, M. Optimum power allocation and bit loading for BICM systems. "IEEE transactions on communications", 01 Juliol 2010, vol. 58, núm. 8, p. 2314-2323.
URIhttp://hdl.handle.net/2117/12470
DOI10.1109/TCOMM.2010.062310.080128
ISSN0090-6778
Publisher versionhttp://ieeexplore.ieee.org/xpl/freeabs_all.jsp?arnumber=5497976
Collections
Share: