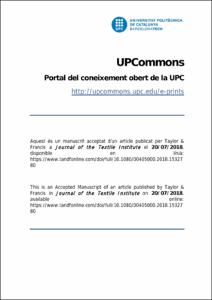 Wang, Jun
Document typeArticle
Rights accessOpen Access
Abstract
The vortices are generated at the conventional transfer channel, having adverse effects on fiber configuration. In a former research, a conventional transfer channel was modified via rounding the transfer channel inlet corner and adding a bypass channel. The simulation results obtained with the modified transfer channel showed that the vortices were eliminated and the inlet air velocity increased. We present the impact of this modification on the yarn properties and fiber straightness. Four groups of yarn samples were spun using the conventional and modified spinning system. Yarn properties and fiber straightness along the rotor groove were evaluated. Results revealed that tenacities of the yarns spun on the modified system, increased in comparison to that of the conventionally spun yarns. The number of nearly straight fibers is increased by 25.55% by using the modified system, which was mainly attributed to the decrease in the number of fibers with trailing and leading hooks.
CitationLin, H., Akangwasa, N., Bergadà, J.M., Wang, J. Effect of rotor spinning transfer channel modification on fiber orientation and yarn properties. "Journal of the Textile Institute", 2019, vol. 110, no 5, p. 652-659.
URIhttp://hdl.handle.net/2117/124663
DOI10.1080/00405000.2018.1532780
ISSN0040-5000
Publisher versionhttps://www.tandfonline.com/doi/full/10.1080/00405000.2018.1532780
Collections
Share: