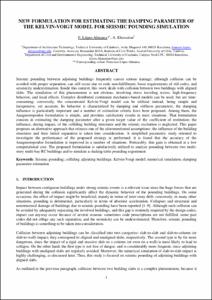 Except where otherwise noted, content on this work is licensed under a Creative Commons license : Attribution-NonCommercial-NoDerivs 3.0 Spain
Abstract
Seismic pounding between adjoining buildings frequently causes serious damage; although collision can be avoided with proper separation, can still occur due to code non-fulfillment, loose requirements of old codes, and seismicity underestimation. Inside this context, this work deals with collision between two buildings with aligned slabs. The simulation of this phenomenon is not obvious, involving stress traveling waves, high-frequency behavior, and local effects. Complex distributed continuum mechanics-based models can be used, but are time-consuming; conversely, the concentrated Kelvin-Voigt model can be utilized instead, being simple and inexpensive, yet accurate. Its behavior is characterized by damping and stiffness parameters; the damping influence is particularly important and a number of estimation criteria have been proposed. Among them, the Anagnostopoulos formulation is simple, and provides satisfactory results in most situations. That formulation consists in estimating the damping parameter after a given target value of the coefficient of restitution; the influence, during impact, of the colliding building structures and the seismic excitation is neglected. This paper proposes an alternative approach that releases one of the aforementioned assumptions: the influence of the building structures and their initial separation is taken into consideration. A simplified parametric study oriented to investigate the performance of the proposed strategy is performed; it is found that the accuracy of the Anagnostopoulos formulation is improved in a number of situations. Noticeably, this gain is obtained at a low computational cost. The proposed formulation is satisfactorily utilized to analyze pounding between two multi-story multi-bay RC buildings and to simulate a shaking table pounding experiment.
CitationLopez Almansa, F., Kharazian, A. New formulation for estimating the damping parameter of the Kelvin-Voigt model for seismic pounding simulation. "Engineering structures", 15 Novembre 2018, vol. 175, p. 284-295.
URIhttp://hdl.handle.net/2117/124659
DOI10.1016/j.engstruct.2018.08.024
ISSN0141-0296
Publisher versionhttps://www.sciencedirect.com/science/article/pii/S0141029618301664
Collections
Share: