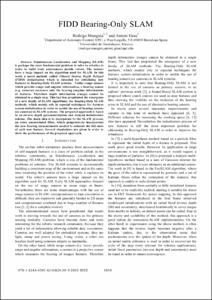 Document typeConference report
PublisherIEEE Press. Institute of Electrical and Electronics Engineers
Rights accessOpen Access
Abstract
Simultaneous Localization and Mapping (SLAM) is perhaps the most fundamental problem to solve in robotics in order to build truly autonomous mobile robots. The sensors have a large impact on the algorithm used for SLAM. In this work a novel method, called Filtered Inverse Depth Delayed (FIDD) Initialization which is intended for initializing new features in Bearing-Only SLAM systems. Unlike range sensors which provide range and angular information, a bearing sensor (e.g. cameras) measures only the bearing (angular information) of features. Therefore depth information (range) cannot be obtained in a single step. This fact has propitiated the emergence of a new family of SLAM algorithms: the Bearing-Only SLAM methods, which mainly rely in especial techniques for features system-initialization in order to enable the use of bearing sensors (as cameras) in SLAM systems. The proposed approach is based in an inverse depth parameterization and delayed initialization scheme. The main idea is to incorporate to the SLAM process, an extra uncorrelated filter, which progressively incorporates the new bearing measurements needed to estimate the full state of each new feature. Several simulations are given in order to show the performance of the proposed approach.
CitationMunguia, R.; Grau, A. FIDD bearing-only SLAM. A: IEEE Industrial Electronics Society (IECOM). "IEEE 2010 International Symposium on Industrial Electronics". Bari: IEEE Press. Institute of Electrical and Electronics Engineers, 2010, p. 1858-1863.
URIhttp://hdl.handle.net/2117/12465
DOI10.1109/ISIE.2010.5637549
ISBN978-1-4244-6391-6
Collections
Share: