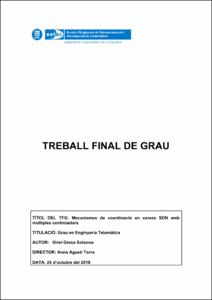 Document typeBachelor thesis
Rights accessOpen Access
Abstract
The fast growth of Internet and all the advantages that contribute to people&#8217;s life has caused that the current network architecture has been overloaded reaching some levels that exceed of the possibilities that it offers. This fact has generated a reconsideration of the network and try to turn it into a more scalable and reliable network, by a faster way and less cost. This is trying to carry out with the transformation of the networks to some virtual environment and changing the hardware for non proprietary hardware, decoupling the data layer from the control layer where a controller (or set of controllers) manages all the Intelligence of the network. Technologies like SDN are those that allow us to do this decoupling, and in spite of that still are in full development already, it begins to see some improvements with regard to the previous networks. So that, there&#8217;s some telephonic companies that already use these technologies. Among the projects that are being carried out in this field, we find the ONOS project that has already become one of the open source SDN controllers most used for the creation of solutions for the aforementioned technologies. The aim of this project focuses on the implementation of an application that allows to manage the devices among the network controllers in ONOS versions 1.14 and 1.15. As a result, it has been possible to create two applications to coordinate the devices between the controllers, both for version 1.14 and for 1.15, and in addition a documentation has been created of all the steps followed to get to create these applications, for in the future, to be able to continue implementing applications to manage the devices according to the criteria desired with some guidelines to be followed in order to be more efficient and not to lose too much time in understanding the structure and functioning of the code.
SubjectsComputer networks, Xarxes definides per programari (Tecnologia de xarxes d'ordinadors)
DegreeGRAU EN ENGINYERIA TELEMÀTICA (Pla 2009)
URIhttp://hdl.handle.net/2117/124603
Collections
Share: