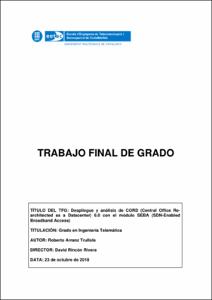 In recent years, the volume of data transmitted has increased substantially. Due to the increase of users and devices that generate data traffic, the telecommunication services operators are facing a challenge to adapt their access networks and thus be able to satisfy the demand of bandwidth and services. In the central offices there are equipment and proprietary devices that have been assembled over the years in an inconsistent architecture. These systems have been incorporating functionalities progressively, giving rise to a complex system and barely adaptable to current needs. CORD (Central Office Re-architected as a Datacenter) is a proposal to solve this problem. CORD intends to apply a new design to the central offices based on virtualization, disaggregation of components and economies of scale. In this work, we have installed a virtual implementation of CORD 6.0 and the SEBA-in-a-Box module (which includes the ability to deploy virtualized access devices) in order to have a platform suitable for analysis and exploration of the system in an academic framework. The platform implemented can also be used as a basis to design and analyse other scenarios in future research projects. An analysis of the deployment process has been made, following a workflow proposed by AT&T and documenting the operation of the platform. Additionally, a modified deployment of SEBA-in-a-Box has been created, with the aim of expanding the virtual infrastructure. Tests have been carried out on the configuration of the network hosting the project and the configuration of the devices in the system. Finally, the access infrastructure has been extended and the process documented for future experiments.
SubjectsVirtual computer systems, Cloud computing, Sistemes virtuals (Informàtica), Telecomunicació, Sistemes de, Ordinadors, Xarxes d', Computació en núvol
URIhttp://hdl.handle.net/2117/124602