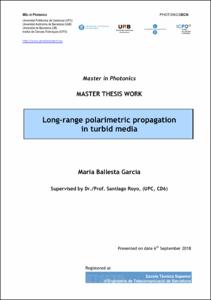 Document typeMaster thesis
Rights accessOpen Access
Abstract
Imaging through nebulous media encountered in nature, like fog, rain, and light haze, is on the most up-to-date research problems in the field of navigation as a result of the recent increasing interest in autonomous vehicles. However, it is still an unresolved problem. One of the proposed approaches to solve it is based on polarization, as in a turbid medium, polarized light is known to preserve its polarization properties deeper into the medium. Thus, the main aim of this thesis is to create from scratch a model of the interaction between polarized light and the scattering particles present in this kind of medium. As a result, this work presents the development and validation of a model based on a combination of Mie theory and the Monte Carlo method, for its later use as tool to study the feasibility and characteristics of a polarimetric imaging technique for long-range imaging in nebulous media.
Description
Lidar imaging is a powerful measurement technique where a laser pulse is shone onto an object and the beam reflected back is recovered at some solid-state detector. The time elapsed is counted so an automated measurement of the distance to the target is obtained, without any further calculation. The concept is also referred to as ladar or time of-flight imaging. Most popular recent applications involve landing aids, object recognition, self-guided vehicles and safety and security applications in transport. One of the major issues remaining for long and short range lidar
SubjectsPolarimetric remote sensing, Automobile driving -- Automatic control, Automòbils -- Conducció -- Control automàtic
URIhttp://hdl.handle.net/2117/124593
Collections
Share: