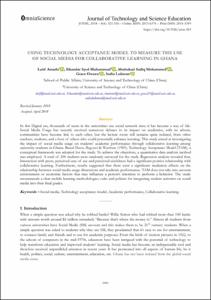 Show full item record
Amadu, Latif
Muhammad, Sikandar Syed
Mohammed, Abubakari Sadiq
Owusu, Grace
Lukman, Sadia
Document typeArticle
PublisherOmniaScience
Rights accessOpen Access
Abstract
In this Digital era, thousands of teens in the universities use social network sites; it has become a way of life. Social Media Usage has recently received numerous debates in its impact on academics, with its advent, communities have become link to each other, but the lecture room still remains quite isolated, from other teachers, students, and a host of others who could potentially enhance learning. This study aimed at investigating the impact of social media usage on students’ academic performance through collaborative learning among university students in Ghana. Based Davis, Bagozzi & Warshaw (1989), Technology Acceptance Model (TAM), a conceptual framework was adopted for the study. To achieve the objectives, a quantitative data analysis method was employed. A total of 200 students were randomly surveyed for the study. Regression analysis revealed that, Interaction with peers, perceived ease of use and perceived usefulness had a significant positive relationship with collaborative learning. Furthermore, results suggested that there exist a significant mediation effects on the relationship between social media usage dimensions and academic performance. TAM does not take into account environment or economic factors that may influence a person’s intention to perform a behavior. The study recommends a clear mobile learning methodologies, rules and policies for integrating student activities on social media into their final grades
Location
1: Pru, Ghana
CitationAmadu, L. [et al.]. Using technology acceptance model to measure the use of social media for collaborative learning in Ghana. "JOTSE: Journal of Technology and Science Education", Setembre 2018, vol. 8, núm. 4, p. 321-336.
URIhttp://hdl.handle.net/2117/124587
DOI10.3926/jotse.383
DLB-2000-2012
ISSN2013-6374
2014-5349
Collections
Share: