Amphiphilic polypyrrole-poly(Schiff base) copolymers with poly(ethylene glycol) side chains: synthesis, properties and applications 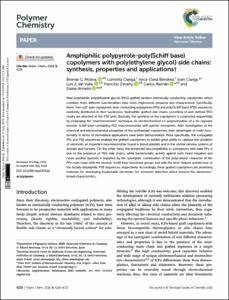 Document typeArticle
Rights accessOpen Access
Abstract
New amphiphilic poly(ethylene glycol) (PEG)-grafted random intrinsically conducting copolymers which combine three different functionalities have been engineered, prepared and characterized. Specifically, these “rod-coil” type copolymers bear conducting polypyrrole (PPy) and poly(Schiff base) (PSB) sequences randomly distributed in their backbones; hydrophilic grafted side chains consisting of well-defined PEG chains are attached to the PSB units. Basically, the synthesis of the copolymers is conducted sequentially by employing the “macromonomer” technique via electrochemical co-polymerization of a bis (pyrrole) benzoic Schiff base-containing PEG macromonomer with pyrrole monomers. After investigation of the chemical and electrochemical properties of the synthesized copolymers, their advantages of multi-functionality in terms of biomedical applications have been demonstrated. More specifically, the conjugated PPy and PSB sequences enabled the grafted copolymers to exhibit great ability to catalyse the oxidation of serotonin, an important neurotransmitter found in blood platelets and in the central nervous systems of animals and humans. On the other hand, the enhanced biocompatibility in comparison with bare PPy is due to the presence of PEG side chains, while bacteriostatic activity against both Gram-negative and Gram-positive bacteria is imparted by the synergistic combination of the polycationic character of the PPy main chain with the benzoic Schiff base functional groups and with the bent-shaped architecture of the facially amphiphilic PSB sequences, respectively. Accordingly, these grafted copolymers are promising materials for developing implantable electrodes for serotonin detection which present the abovementioned characteristics.
CitationMolina, B., Cianga, L., Bendrea, A., Cianga, Ioan, del Valle, LJ., Estrany, F., Aleman, C., Armelin, E. Amphiphilic polypyrrole-poly(Schiff base) copolymers with poly(ethylene glycol) side chains: synthesis, properties and applications. "Polymer chemistry", 21 Agost 2018, vol. 9, núm. 31, p. 4218-4232.
URIhttp://hdl.handle.net/2117/124579
DOI10.1039/c8py00762d
ISSN1759-9954
Publisher versionhttps://pubs.rsc.org/en/content/articlelanding/2018/py/c8py00762d#!divAbstract
Collections
Share: