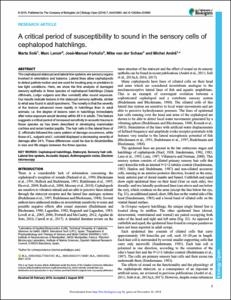 Document typeArticle
Rights accessOpen Access
Abstract
The cephalopod statocyst and lateral line systems are sensory organs involved in orientation and balance. Lateral lines allow cephalopods to detect particle motion and are used for locating prey or predators in low light conditions. Here, we show the first analysis of damaged sensory epithelia in three species of cephalopod hatchlings (Sepia officinalis, Loligo vulgaris and Illex coindetii) after sound exposure. Our results indicate lesions in the statocyst sensory epithelia, similar to what was found in adult specimens. The novelty is that the severity of the lesions advanced more rapidly in hatchlings than in adult animals; i.e. the degree of lesions seen in hatchlings immediately after noise exposure would develop within 48 h in adults. This feature suggests a critical period of increased sensitivity to acoustic trauma in those species as has been described in developing mammalian cochlea and avian basilar papilla. The hair cells in the lateral lines of S. officinalis followed the same pattern of damage occurrence, while those of L. vulgaris and I. coindetii displayed a decreasing severity of damage after 24 h. These differences could be due to dissimilarities in size and life stages between the three species.
CitationSole, M., Lenoir, M., Fortuño, J.M., Van Der Schaar, M., Andre, M. A critical period of susceptibility to sound in the sensory cells of cephalopod hatchlings. "Biology Open", 1 Gener 2018, vol. 7, p. 1-13.
URIhttp://hdl.handle.net/2117/124572
DOI10.1242/bio.033860
ISSN2046-6390
Publisher versionhttp://bio.biologists.org/content/7/10/bio033860
Collections
Share: