The level set method for motion by mean curvature 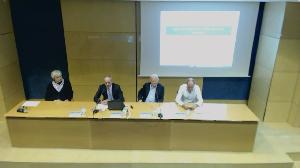 Access to Zonavideo
Colding, Tobias
Chair / Department / Institute
Universitat Politècnica de Catalunya. Facultat de Matemàtiques i Estadística
Document typeAudiovisual
Rights accessOpen Access
Abstract
Many physical phenomema lead to tracking moving fronts whose speed depends on the curvature. The "level set method" has been tremendously succesful for this, but the solutions are typically only continuous. We will discuss results that show that the level set flow has twice differentiable solutions. This is optimal. These analytical questions crucially rely on understanding the underlying geometry. The proofs draws inspiration from real algebraic geometry and the theory of analytical functions.
Description
Tobias Colding, born in Copenhagen, received his Ph.D. in 1992 at the University of Pennsylvania under Chris Croke. Since 2005 Colding has been a professor of mathematics at MIT. He was on the faculty at the Courant Institute of New York University in various positions from 1992 to 2008. In the early stage of his career, Colding did impressive work on manifolds with bounds on Ricci curvature. In 1998, he gave an invited address to the ICM in Berlin. He began coauthoring with William P. Minicozzi at this time: first on harmonic functions and later on minimal surfaces. In 2010 Tobias H. Colding received the Oswald Veblen Prize in Geometry together with William Minicozzi II for their profound work on minimal surfaces. Since 2008 he has been a Fellow of the American Academy of Arts and Sciences, and since 2006 a foreign member of the Royal Danish Academy of Sciences and Letters, and also since 2006 an honorary professor of University of Copenhagen, Denmark.
SubjectsNumerical analysis, Anàlisi numèrica
URIhttp://hdl.handle.net/2117/124553
Collections
Share: