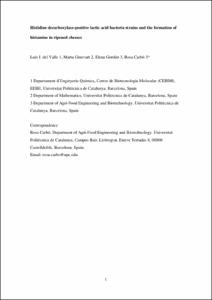 Document typeArticle
Rights accessOpen Access
Abstract
The relationship between histidine decarboxylase-positive (hdc+) lactic acid bacteria (LAB) counts and the amounts of biogenic amines, particularly histamine, in cheeses made with and without LAB starter were investigated. Sixty LAB strains were isolated from ripened cheeses made with raw milk inoculated with lactic starter and cheeses without starter. The strains were identified by carbohydrate fermentation test and the histidine decarboxylase gene was determined by PCR. Biogenic amine contents from the cheeses were determined by HPLC. LAB counts and their diversity were higher in the cheeses without starter. The cheeses contained low concentrations of the studied amines. The lowest concentrations were found for ethylamine and putrescine followed by cadaverine, tyramine, phenyletilamine, and histamine, especially in the cheeses with starter. There was a direct relationship between the percentage of hdc+ LAB strains and histamine and between this percentage and the sum of tyramine, phenylethylamine and ethylamine concentrations.
Citationdel Valle, LJ., Ginovart, M., Gordun, E., Carbó, R. Histidine decarboxylase-positive lactic acid bacteria strains and the formation of histamine in ripened cheeses. "Journal of Food Processing and Preservation", 14 Setembre 2018, vol. 42, núm. 9, p. 1-9.
URIhttp://hdl.handle.net/2117/124540
DOI10.1111/jfpp.13708
ISSN1745-4549
Publisher versionhttps://onlinelibrary.wiley.com/doi/abs/10.1111/jfpp.13708
Collections
Share: