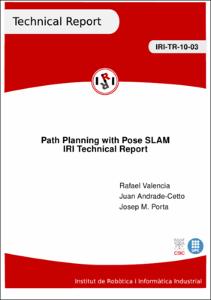 Document typeExternal research report
Rights accessOpen Access
Abstract
The probabilistic belief networks that result from standard feature-based simultaneous localization and map building (SLAM) approaches cannot be directly used to plan trajectories. The reason is that they produce a sparse graph of landmark estimates and their probabilistic relations, which is of little value to find collision free paths for navigation. In contrast, we argue in this paper that Pose SLAM graphs can be directly used as belief roadmaps (BRMs). The original BRM algorithm assumes a known model of the environment from which probabilistic sampling generates a roadmap. In our work, the roadmap is built on-line by the Pose SLAM algorithm. The result is a hybrid BRM-Pose SLAM method that devises optimal navigation strategies on-line by searching for the path with lowest accumulated uncertainty for the robot pose. The method is validated over synthetic data and standard SLAM datasets.
CitationValencia, R.; Andrade-Cetto, J.; Porta, J. "Path planning with pose SLAM". 2010.
Is part ofIRI-DT-10-03
URIhttp://hdl.handle.net/2117/12449
Collections
Share: