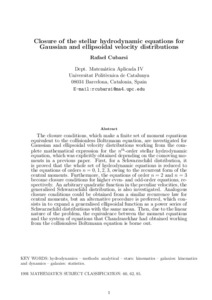 Except where otherwise noted, content on this work is licensed under a Creative Commons license : Attribution-NonCommercial-NoDerivs 2.5 Spain
Abstract
The closure conditions, which make a finite set of moment equations equivalent to the collisionless Boltzmann equation, are investigated for Gaussian and ellipsoidal velocity distributions working from the com- plete mathematical expression for the nth-order stellar hydrodynamic equation, which was explicitly obtained depending on the comoving mo- ments in a previous paper. First, for a Schwarzschild distribution, it is proved that the whole set of hydrodynamic equations is reduced to the equations of orders n = 0,1,2,3, owing to the recurrent form of the central moments. Furthermore, the equations of order n = 2 and n = 3 become closure conditions for higher even- and odd-order equations, re- spectively. An arbitrary quadratic function in the peculiar velocities, the generalised Schwarzschild distribution, is also investigated. Analogous closure conditions could be obtained from a similar recurrence law for central moments, but an alternative procedure is preferred, which con- sists in to expand a generalised ellipsoidal function as a power series of Schwarzschild distributions with the same mean. Then, due to the linear nature of the problem, the equivalence between the moment equations and the system of equations that Chandrasekhar had obtained working from the collisionless Boltzmann equation is borne out.
URIhttp://hdl.handle.net/2117/1244
Collections
Share: