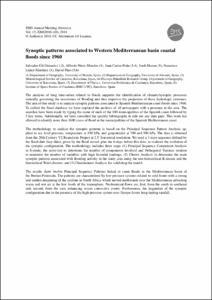 The analysis of long time-series related to floods supports the identification of climatic/synoptic processes naturally governing the occurrence of flooding and thus improves the projection of these hydrologic extremes. The aim of this study is to analyze synoptic patterns associated to Spanish Mediterranean coast floods since 1960. To collect the flood database we have explored the archives of all newspapers with a presence in the area. The searches have been made by typing the name of each of the 180 municipalities of the Spanish coast followed by 5 key terms. Additionally, we have consulted the specific bibliography to rule out any data gaps. This work has allowed to identify more than 3600 cases of flood in the municipalities of the Spanish Mediterranean coast. The methodology to analyze the synoptic patterns is based on the Principal Sequence Pattern Analysis applied to sea level pressure, temperature at 850 hPa, and geopotential at 700 and 500 hPa. The data is obtained from the 20th Century V2 Reanalysis Project at 2.5 ° horizontal resolution. We used a 7-days sequence defined by the flood-date (key-date), given by the flood record, plus the 6-days before this date, to evaluate the evolution of the synoptic configuration. The methodology includes three steps: (1) Principal Sequence Component Analysis in S-mode, the scree-test to determine the number of components involved and Orthogonal Varimax rotation to minimize the number of variables with high factorial loadings; (2) Cluster Analysis to determine the main synoptic patterns associated with flooding activity in the study area using the non-hierarchical K-means and the hierarchical Ward clusters; and (3) Discriminant Analysis for validating the model. The results show twelve Principal Sequence Patterns linked to coast floods in the Mediterranean basin of the Iberian Peninsula. The patterns are characterized by low-pressure systems related to cold fronts with a strong and sudden deepening of the cyclone in North Africa which moved northwards over the Mediterranean advecting warm and wet air at the low levels of the troposphere. Predominant flows are, first, from the south to southeast and, second, from the east, enhancing severe convective events. Furthermore, the stagnation of the synoptic configuration due to the presence of the high-pressure system over Europe favors long-lasting rainfall.