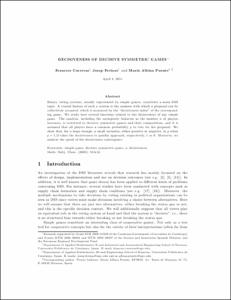 Document typeExternal research report
Rights accessOpen Access
Abstract
Binary voting systems, usually represented by simple games, constitute a main DSS topic. A crucial feature of such a system is the easiness with which a proposal can be collectively accepted, which is measured by the "decisiveness index" of the corresponding game. We study here several functions related to the decisiveness of any simple game. The analysis, including the asymptotic behavior as the number n of players increases, is restricited to decisive symmetric gammes and their compositions, and it is assumed that all players have a common probability p to vote for the proposal. We show that, for n large enough, a small variation, either positive or negaive, in p when p=1/2 takes the decisiveness to quickly approach , respectively, 1 or 0. Moreover, we analyze the speed of the decisiveness convergence.
Description
Reseach supported by Grant SGR 2009-01029 of the Catalonia Government (Generalitat de Catalunya) and Frants MTM 2006-06064 and MTM 2009-08037 of the Science and Innovation Spanish Ministry and the European Regional Development Fund.
URIhttp://hdl.handle.net/2117/12437
Collections
Share: