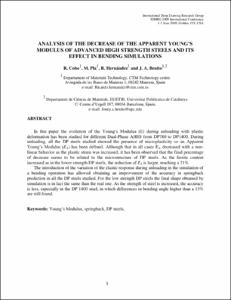 Document typeConference lecture
Rights accessOpen Access
Abstract
In this paper the evolution of the Young’s Modulus (E) during unloading with plastic deformation has been studied for different Dual-Phase AHSS from DP780 to DP1400. During unloading, all the DP steels studied showed the presence of microplasticity so an Apparent Young’s Modulus (EA) has been defined. Although that in all cases EA decreased with a non-linear behavior as the plastic strain was increased, it has been observed that the final percentage of decrease seems to be related to the microstructure of DP steels. As the ferrite content increased as in the lower strength DP steels, the reduction of EA is larger, reaching a 21%. The introduction of the variation of the elastic response during unloading in the simulation of a bending operation has allowed obtaining an improvement of the accuracy in springback prediction in all the DP steels studied. For the low strength DP steels the final shape obtained by simulation is in fact the same than the real one. As the strength of steel is increased, the accuracy is less, especially in the DP 1400 steel, in which differences in bending angle higher than a 15% are still found.
CitationCobo, R. [et al.]. Analysis of the decrease of the apparent young's modulus of advanced high strength steels and its effect in bending simulations. A: International Deep Drawing Research Group. "IDDRG 2009 International Conference". Golden: 2009, p. 109-117.
URIhttp://hdl.handle.net/2117/12430
Collections
Share: