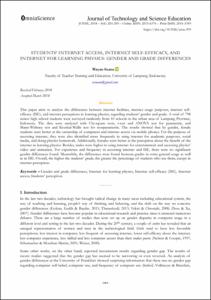 Show full item record
Suana, Wayan
Document typeArticle
PublisherOmniaScience
Rights accessOpen Access
Abstract
This paper aims to analyze the differences between internet facilities, internet usage purposes, internet selfefficacy (ISE), and internet perceptions in learning physics, regarding students’ gender and grade. A total of 798 senior high school students were surveyed randomly from 10 schools in the urban area of Lampung Province, Indonesia. The data were analyzed with Chi-square tests, t-test and ANOVA test for parametric, and Mann-Withney test and Kruskal-Wallis test for nonparametric. The results showed that by gender, female students were better at the ownership of computers and internet access via mobile phones. For the purpose of accessing internet, they were also identified more frequently in using internet for academic purposes, social media, and doing physics homework. Additionally, females were better at the perception about the benefit of the internet in learning physics. Besides, males were higher in using internet for entertainment and accessing physics’ video and animation. For experience and frequency in accessing internet and ISE, there were no significant gender differences found. Meanwhile, the differences were found between grades in some general usage as well as in ISE. Overall, the higher the students’ grade, the greater the percentage of students who use them, except in internet perception
CitationSuana, W. Students’ internet access, internet self-efficacy, and internet for learning physics: gender and grade differences. "JOTSE: Journal of Technology and Science Education", Setembre 2018, vol. 8, núm. 4, p. 281-290.
URIhttp://hdl.handle.net/2117/124223
DOI10.3926/jotse.399
DLB-2000-2012
ISSN2013-6374
2014-5349
Collections
Share: