Magnetobiochronology of Lower Pliocene marine sediments from the lower Guadalquivir Basin: insights into the tectonic evolution of the Strait of Gibraltar area 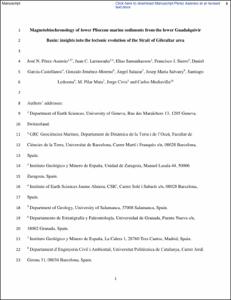 Document typeArticle
Rights accessOpen Access
Abstract
The Gibraltar Arc is a complex tectonic region, and several competing models have been proposed to explain its evolution. We studied the sedimentary fill of the Guadalquivir Basin to identify tectonic processes that were occurring when the reopening of the Strait of Gibraltar led to the reestablishment of Mediterranean outflow. We present a chronostratigraphic framework for the Lower Pliocene sediments from the lower Guadalquivir Basin (SW Spain). The updated chronology is based on magnetobiostratigraphic data from several boreholes. Our results show that the studied interval in the La Matilla core is in the early Pliocene section, providing better constraints on the sedimentary evolution of the basin during that period. Migrating depositional facies led to a younger onset of sandy deposition basinward. At the northwestern passive margin, a 0.7 m.y. period of sedimentary bypass related to a sharp decrease in sedimentation rates and lower sea levels resulted from the tectonic uplift of the forebulge. In contrast, high sedimentation rates with continuous deep-marine sedimentation are recorded at the basin center due to continuous tectonic subsidence and west-southwestward progradation of axial depositional systems. The marginal forebulge uplift, continuous tectonic basinal subsidence, and southward progradation of clinoforms in the early Pliocene can be explained by the pull of a lithospheric slab beneath the Gibraltar Arc as the Strait of Gibraltar opened. These findings are, to our knowledge, the first reported sedimentary expression of slab pull beneath the Betics related to the opening of the Strait of Gibraltar after the Messinian salinity crisis.
CitationPérez-Asensio, J.N., Larrasoaña, J.C., Samankassou, E., Salvany, J.M. Magnetobiochronology of Lower Pliocene marine sediments from the lower Guadalquivir Basin: insights into the tectonic evolution of the Strait of Gibraltar area. "Geological Society of America bulletin", Novembre 2018, vol. 130, núm. 11-12, p. 1791-1808.
URIhttp://hdl.handle.net/2117/124128
DOI10.1130/B31892.1
ISSN0016-7606
Publisher versionhttps://pubs.geoscienceworld.org/gsa/gsabulletin/article-abstract/130/11-12/1791/530891/magnetobiochronology-of-lower-pliocene-marine?redirectedFrom=fulltext
Other identifiershttps://www.researchgate.net/publication/325030969_Magnetobiochronology_of_Lower_Pliocene_marine_sediments_from_the_lower_Guadalquivir_Basin_Insights_into_the_tectonic_evolution_of_the_Strait_of_Gibraltar_area
Collections
Share: