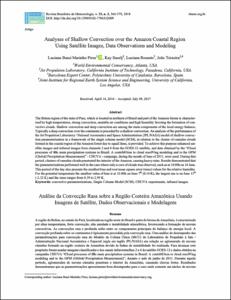 Show full item record
Pires Bassi Marinho, Luciana
Suselj, Kay
Rossato, Luciana
Teixeira, João
Document typeArticle
PublisherSociedade Brasileira de Meteorologia
Rights accessOpen Access
Abstract
The Belem region of the state of Para, which is located in northern of Brazil and part of the Amazon biome is characterized by high temperatures, strong convection, unstable air conditions and high humidity favoring the formation of convective clouds. Shallow convection and deep convection are among the main components of the local energy balance. Typically a deep convection over the continents is preceded by a shallow convection. An analysis of the performance of the Jet Propulsion Laboratory / National Aeronautics and Space Administration (JPL/NASA) model of shallow convection parameterization in a framework of the single column model (SCM), in relation to the cluster of cumulus clouds formed in the coastal region of the Amazon forest due to squall lines, is provided. To achieve this purpose enhanced satellite images and infrared images from channels 2 and 4 from the GOES-12 satellite, and data obtained by the “Cloud processes of tHe main precipitation systems in Brazil: A contribUtion to cloud resolVing modeling and to the GPM (GlobAl Precipitation Measurement)” - CHUVA - campaign, during the month of June of 2011, were used. During that period, clusters of cumulus clouds penetrated the interior of the Amazon, causing heavy rains. Results demonstrated that the parameterizations performed well in the case where only a core of clouds was observed, such as at 18:00h on 14 June. This period of the day also presents the smallest bias and root mean square error (rmse) values for the relative humidity. For the potential temperature the smallest value of bias is at 12:00h on June 7th (0.18 K), the largest one is on June 11th (-2.32 K) and the rmse ranges from 0.59 to 2.99 K.
CitationPires, L., Suselj, K., Rossato, L., Teixeira, J. Analyses of shallow convection over the amazon coastal region using satellite images, data observations and modeling Análise da Convecção Rasa sobre a Região Costeira Amazônica Usando Imagens de Satélite, Dados Observacionais e Modelagem. "Revista brasileira de meteorologia", 1 Abril 2018, vol. 33, núm. 2, p. 366-379.
URIhttp://hdl.handle.net/2117/124088
DOI10.1590/0102-7786332009
ISSN1982-4351
Publisher versionhttp://www.scielo.br/scielo.php?script=sci_abstract&pid=S0102-77862018000200366&lng=en&nrm=iso&tlng=en
Collections
Share: