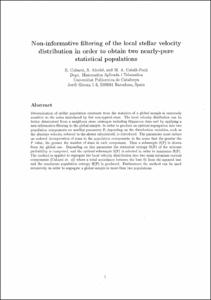 Alcobé López, Santiago
Catala-Poch, M.A.
Document typeConference lecture
PublisherUNIVERSITAT MANCHESTER
Rights accessOpen Access
Abstract
The determination of stellar population constants from the statistics of a global sample is extremely sensitive to the noise introduced by a few non-typical stars. The local velocity distribution can be better determined from a catalogue of nearby stars including Hipparcos data and by applying a non-informative filtering to the global sample. In order to produce an optimal segregation into two population components an auxiliary parameter P, depending on the distribution of variables such as the absolute velocity referred to the slower subcentroid, is introduced. The parameter must induce an ordered incorporation of stars to the population components, in the sense that the greater the P value, the greater the number of stars in each component. Then a subsample S(P) is drawn from the global one. Depending on this parameter the statistical entropy H(P) of the mixture probability is computed, and the optimal subsample S(P) is selected in order to maximize H(P). The method is applied to segregate the local velocity distribution into two main trivariate normal components (Cubarsi et. al) where a total accordance between the best fit from the chi-squared test and the maximum population entropy H(P) is produced. Furthermore the method can be used recursively in order to separate a global sample into more than two populations.
CitationCubarsi, R.; Alcobé, S.; Catala-Poch, M.A. Non-informative filtering of the local stellar velocity distribution to obtain two nearly-pure statistical populations. A: International Astronomical Union. General Assembly. "XXIVth General Assembly of the International Astronomical Union". Manchester: UNIVERSITAT MANCHESTER, 2000, p. 1-8.
URIhttp://hdl.handle.net/2117/12400
Collections
Share: