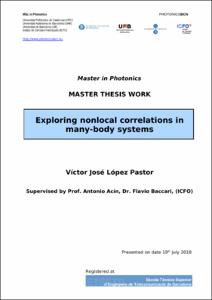 We address the question of how to evaluate the Bell correlations depth, i.e. the number of parties sharing genuinely nonlocal correlations in a multipartite system. Previous work has shown that it is possible to construct inequalities based on two-body symmetric correlation functions that can reveal k-nonlocality, but only for $k\leq6$. We extend this result up to k<25 by means of a new algorithm whose complexity is poly(k). Furthermore, we provide a hierarchical approximation that in principle could be used to extend such procedure to arbitrarily large values of k. Since the inequalities that we consider only require assessing two-body symmetric correlation functions, they are suitable for experiments involving a large number of particles. Hence, our results open the way for the study of the multipartite nonlocality depth of many-body systems, such as Bose-Einstein condensates or thermal ensembles.

While the interest in multipartite nonlocality has grown in recent years, its existence in large quantum systems is difficult to confirm experimentally. This is mostly due to the inadequacy of standard multipartite Bell inequalities to many-body systems: such inequalities usually rely on expectation values involving many parties and require an individual addressing of each party. A recent work [J. Tura et al. Science 344, 6189 (2014)] proposed simpler Bell inequalities overcoming such difficulties, opening the way for the detection of Bell correlations with trusted collecti
SubjectsQuantum theory, Algorithms, Quàntums, Teoria dels, Algorismes
URIhttp://hdl.handle.net/2117/123888