The extreme floods in the Ebro River basin since 1600 CE 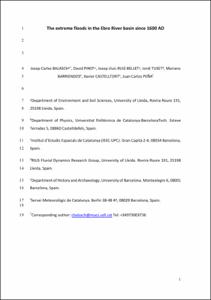 Ruiz Bellet, Josep Lluís
Tuset Mestre, Jordi
Barriendos Valve, Mariano
Castelltort, Xavier
Peña, Juan Carlos
Document typeArticle
PublisherElsevier
Rights accessOpen Access
Abstract
Reliable and complete knowledge of the historical floods is necessary for understanding the extreme hydrological dynamics of the rivers, their natural variability and anthropic changes. In this work we reconstruct the most important floods of the Ebro basin during the last 400¿years in different areas of the basin. The analysis is based on four different areas: the Ebro River at Zaragoza, the Cinca River at Fraga, the Segre River at Lleida, and the Ebro River near its mouth at Tortosa. Based on a documentary research, we have first obtained relevant information about the initial conditions (rainfall duration and distribution, snow cover influence) and the maximum flood heights that allow to reconstruct the maximum peak flows by using hydraulic models and to calculate the subbasins contributions. The results show four main types of extreme floods: a) those affecting simultaneously all the subbasins with the highest peak discharges (Ebro at Tortosa in 1787: 0.15¿m3¿s-1¿km-2); b) those originated at the western basin, upstream from Zaragoza, with an Atlantic origin, presenting moderate maximum peak flows, caused by persistent winter rainfall and where snowmelt significantly contributes to the flood; c) those originating at the central Pyrenean subbasins, with Mediterranean origin, occurring, with high peak discharges. These mainly occur during autumn as a consequence of rainfalls of different duration (between 3¿days and 1¿month), and without significant snow thawing and d) finally, less frequent but very intense flash floods events centered in the Lower Ebro area with low peak flows. In terms of frequency, two different periods can be distinguished: from 1600 until 1850, the frequency of events is low; since 1850 the frequency of events is clearly higher, due to an increase of the climatic variability during last stages of the Little Ice Age. From the 1960's reservoirs construction modifies discharges regime.
CitationBalasch, J., Pino, D., Ruiz, J., Tuset, J., Barriendos, M., Castelltort, X., Peña, J. The extreme floods in the Ebro River basin since 1600 CE. "Science of the total environment", 28 Juliol 2018, vol. 646, p. 645-660.
URIhttp://hdl.handle.net/2117/123851
DOI10.1016/j.scitotenv.2018.07.325
ISSN0048-9697
Publisher versionhttps://www.sciencedirect.com/science/article/pii/S0048969718328213
Collections
Share: