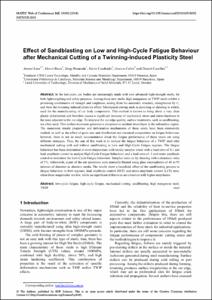 Except where otherwise noted, content on this work is licensed under a Creative Commons license : Attribution 3.0 Spain
Abstract
In the last years, car bodies are increasingly made with new advanced high-strength steels, for both lightweighting and safety purposes. Among these new steels, high-manganese or TWIP steels exhibit a promising combination of strength and toughness, arising from the austenitic structure, strengthened by C, and from the twinning induced plasticity effect. Mechanical cutting such as punching or shearing is widely used for the manufacturing of car body components. This method is known to bring about a very clear plastic deformation and therefore causes a significant increase of mechanical stress and micro-hardness in the zone adjacent to the cut edge. To improve the cut edge quality, surface treatments, such as sandblasting, are often used. This surface treatment generates a compressive residual stress layer in the subsurface region. The monotonic tensile properties and deformation mechanisms of these steels have been extensively studied, as well as the effect of grain size and distribution and chemical composition on fatigue behaviour; however, there is not so much documentation about the fatigue performance of these steels cut using different strategies. Thus, the aim of this work is to analyse the fatigue behaviour of a TWIP steel after mechanical cutting with and without sandblasting in Low and High-Cycle Fatigue regimes. The fatigue behaviour has been determined at room temperature with tensile samples tested with a load ratio of 0.1 and load amplitude control to analyse High-Cycle Fatigue behaviour; and a load ratio of -1 and strain amplitude control to determine the Low-Cycle Fatigue behaviour. Samples were cut by shearing with a clearance value of 5%. Afterwards, a part of the cut specimens were manually blasted using glass microspheres of 40 to 95 microns of diameter as abrasive media. The results show a beneficial effect of the sandblasting process in fatigue behaviour in both regimes, load amplitude control (HCF) and strain amplitude control (LCF) tests, when these magnitudes are low, while no significant differences are observed with higher amplitudes. low-cycle fatigue, high-cycle fatigue, mechanical cutting, sandblasting, high manganese steel, TWIP steel. © The Authors, published by EDP Sciences, 2018.
CitationLara, A., Roca , M., Parareda, S., Cuadrado, N., Calvo, J., Casellas, D. Effect of sandblasting on low and high-cycle fatigue behaviour after mechanical cutting of a twinning-induced plasticity steel. A: International Fatigue Congress. "FATIGUE 2018: 12th International Fatigue Congress: Poitiers Futuroscope, France: May 27-June 1st, 2018: book of abstracts". 2018, p. 1-8.
URIhttp://hdl.handle.net/2117/123807
DOI10.1051/matecconf/201816518002
Publisher versionhttps://www.matec-conferences.org/articles/matecconf/abs/2018/24/matecconf_fatigue2018_18002/matecconf_fatigue2018_18002.html
Collections
Share: