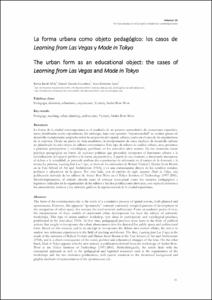 The form of the contemporary city is the result of a cumulative process of spatial actions, both planned and spontaneous. However, this apparent “spontaneity” conceals commonly accepted patterns of development in the occupation of urban space, for instance the road network architecture. From an academic point of view, the interpretation of these models of unplanned urban development has been the subject of university workshops. This type of urban analysis workshop, very close to participatory and sociological practices, proliferated in the convulsed 1960s. At that time, pedagogical practices were born in the form of political actions that sought to incorporate the urban phenomenon into the demand for public space and architectural form. Based on this context, and in an attempt to incorporate the debate into current affairs, the aim is to analyse two reference experiences in the field of teaching and theory. The first, Learning from Las Vegas, is the result of the seminars of Robert Venturi and Denise Scott Brown at the Yale School of Art and Architecture (1968), and is a direct consequence of the social, political and educational changes of the time. On the other hand, Made in Tokyo appears with the new century, a publication derived from the workshops of Atelier Bow-Wow at the Tokyo Institute of Technology (1997-2001). Methodologically, the article deals with the conceptual approach as well as the pedagogical and logistical resources used in the organization of the workshops and the two derivative publications, with special attention to the theoretical background and graphic methods of representation of the spontaneous city.