Using volume of concept in the class environment 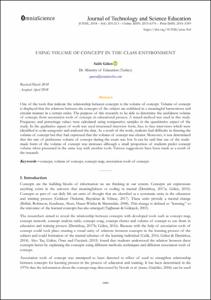 Except where otherwise noted, content on this work is licensed under a Creative Commons license : Attribution-NonCommercial 3.0 Spain
Abstract
One of the tools that indicate the relationship between concepts is the volume of concept. Volume of concept is displayed that the relations between the concepts of the subject are exhibited in a meaningful harmonious and circular manner in a certain order. The purpose of this research; to be able to determine the usefulness volume of concept, from association tools of concept, in educational process. A mixed method was used in this study. Frequency and percentage values were calculated using comparative samples in the quantitative aspect of the study. In the qualitative aspect of work was used structured interview form, face to face interviews which were identified to code-categories and analyzed the data. As a result of the work, students had difficulty in drawing the volume of concept but they had expressed that the volume of concept was clearer. Moreover, it was determined that the rate of preference volume of concept during the exam was low. It can be said that use of the readymade form of the volume of concept was increases although a small proportion of students prefer concept volume when presented in the same way with another tools. Various suggestions have been made as a result of the research
CitationGülen, S. Using volume of concept in the class environment. "JOTSE: Journal of Technology and Science Education", Setembre 2018, vol. 8, núm. 4, p. 205-213.
URIhttp://hdl.handle.net/2117/123597
DOI10.3926/jotse.362
DLB-2000-2012
ISSN2013-6374
2014-5349
Collections
Share: