Design and development of a tunnel magnetoresistance (TMR) magnetometer for LISA 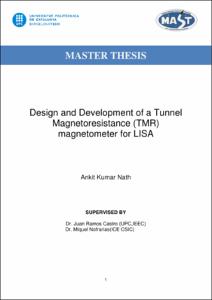 ; Nofrarias, Miquel
CovenanteeInstitut de ciències de l'Espai
Document typeMaster thesis
Rights accessOpen Access
Abstract
Gravitational waves are a prediction of Einstein’s General Relativity recently detect ed by the on - ground laser interferometers LIGO. LISA (Laser Interferometer Space Antenna) is an ESA mission with expected launch in 2034 aiming to detect gravitational radiation by putting three satellites in heliocentric orbit separated 1 million km one f rom each other, forming a triangle. The Gravitational Astronomy group at the Institut de Ciències de l’Espai (IEEC - CSIC) has provided the Data and Diagnostics Subsystems of LISA Pathfinder, a precursor mission launched in December 2015 that successfully pr oved the key technologies to reach the purest free - fall in space to the date, i.e. down to the sub - femto - g [1] . Our group is currently developing the techniques required for future gravitational wave detectors in space. A particular interesting challenge is the m agnetic diagnostic subsystem [2] which requires to reach sensitivities below 10nT/sqrt(Hz) down to the very stable measuring bandwidth of 0.1 mHz. On top of that, the sensors need to be located close to the free - falling test mass --- a condition that can not be achieved with fluxgate sensors. For that reason, o ur group already start ed the development of a magnetic diagnostic subsystem by means of an Anisotropic Magn etoresistors (AMR) [3] . This would allow several improvements when compared to fluxgate sensors: (i) a more compact design, allowing a more of these sensors to be distributed in the spacecraft improving the spatial resolution of t he magnetic field mapping; (ii) low magnetic and thermal back - action enabling a closer location to the TM and (iii) low noise performance in the LISA band down to 0.1 mHz. The current work would be to study an improved design using a new available sensor technology, the so called Tunnel Magnetoresistance (TMR) which would allow and increased sensitivity when compared with the AMRs. This will require the re - design of the signal conditioning circuits for the sensors and the noise and thermal stability chara cterization of the new design in the frequency range of LISA (0.1 mHz to 0.1 Hz).
SubjectsGravitational waves, Electrònica -- Mesuraments, Ones gravitacionals
URIhttp://hdl.handle.net/2117/123441
Collections
Share: