Estimation of fuel inefficiencies due to early descents 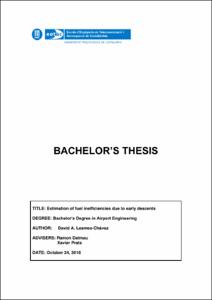 In this project, early descents have been modeled as a combination of two stages. Firstly, a constant - vertical - speed segment beginning at a certain distance, k , before the optimal top of descent (TOD); that eventually intercepts the secon d stage: a nominal (ideal) continuous descent trajectory that would have begun at the optimal TOD and wo uld have then descended at idle thrust until reaching FL100. In both cases, an optimal Mach/CAS profile is maintained. The aforementioned two stages ha ve been simulated separately for several mass ( m ), cruise altitude ( z ) and cost index ( CI ) values using AIRBUS’ Performance Engineering Programs (PEP). In the proposed model, these two trajectories begin at the same point with the same input settings . H owe ver, they do not start descending at the same time, with the TOD of the second stage laying a k distance away from the TOD o f the first. For this reason, an initial k distance cruise segment has been added to the second stage when simulating. T he fuel con sumption of both cases was analyzed and compared using custom Python scripts in order to get a preliminary understanding of the se nsitivity of fuel consumption to the independent variables; and to check for identifiable patterns. Fuel inefficiency was thus defined as the extra fuel consumption resulting from anticipating descent initialization , and calculated as the difference in aircraft mass ( m ) between the TOD of the first stage and the point in which the constant - vertical - speed trajectory intercepts the idle - thrust type. For the aircraft used in this study, the A320 - 232, the extra fuel consumptio n incurred by an early descent reached a maximum relative value of 22.63 % and a maximum absolute value of 116 .9 kg (when k = 75 NM); showing the importance of f urther research into this topic.
SubjectsFuel, Navigation (Aeronautics), Combustibles, Navegació aèria
URIhttp://hdl.handle.net/2117/123438