Cosmological perturbations in a class of fully covariant modified theories: application to models with the same background as standard LQC 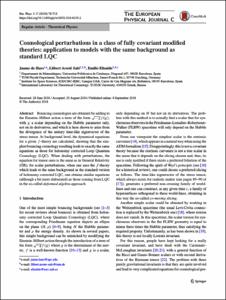 Aresté Saló, Llibert
Elizalde, Emilio
Document typeArticle
PublisherSpringer
Rights accessOpen Access
Abstract
Bouncing cosmologies are obtained by adding to the Einstein–Hilbert action a term of the form -g---vf(¿), with ¿ a scalar depending on the Hubble parameter only, not on its derivatives, and which is here shown to arise from the divergence of the unitary time-like eigenvector of the stress tensor. At background level, the dynamical equations for a given f-theory are calculated, showing that the simplest bouncing cosmology resulting leads to exactly the same equations as those for holonomy corrected Loop Quantum Cosmology (LQC). When dealing with perturbations, the equation for tensor ones is the same as in General Relativity (GR); for scalar perturbations, when one uses the f-theory which leads to the same background as the standard version of holonomy corrected LQC, one obtains similar equations (although a bit more elaborated) as those coming from LQC in the so-called deformed algebra approach
CitationHaro, J., Aresté, L., Elizalde, E. Cosmological perturbations in a class of fully covariant modified theories: application to models with the same background as standard LQC. "European physical journal C", 1 Setembre 2018, vol. 78, núm. 712.
URIhttp://hdl.handle.net/2117/123349
DOI10.1140/epjc/s10052-018-6193-2
ISSN1434-6044
Publisher versionhttps://link.springer.com/article/10.1140/epjc/s10052-018-6193-2
Collections
Share: