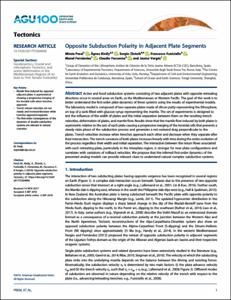 Funiciello, Francesca
Fernandez Ortiga, Manel
Faccenna, Claudio
Vergés, Jaume
Document typeArticle
Rights accessOpen Access
All rights reserved. This work is protected by the corresponding intellectual and industrial property rights. Without prejudice to any existing legal exemptions, reproduction, distribution, public communication or transformation of this work are prohibited without permission of the copyright holder
ProjectASIMILACION DE DATOS PARA UNA SIMULACION INGENIERIL CREIBLE (AEI-DPI2017-85139-C2-2-R)
Abstract
Active and fossil subduction systems consisting of two adjacent plates with opposite retreating directions occur in several areas on Earth, as the Mediterranean or Western Pacific. The goal of this work is to better understand the first-order plate dynamics of these systems using the results of experimental models. The laboratory model is composed of two separate plates made of silicon putty representing the lithosphere, on top of a tank filled with glucose syrup representing the mantle. The set of experiments is designed to test the influence of the width of plates and the initial separation between them on the resulting trench velocities, deformation of plates, and mantle flow. Results show that the mantle flow induced by both plates is asymmetric relative to the axis of each plate causing a progressive merging of the toroidal cells that prevents a steady state phase of the subduction process and generates a net outward drag perpendicular to the plates. Trench velocities increase when trenches approach each other and decrease when they separate after their intersection. The trench curvature of both plates increases linearly with time during the entire evolution of the process regardless their width and initial separation. The interaction between the return flows associated with each retreating plate, particularly in the interplate region, is stronger for near plate configurations and correlates with variations of rollback velocities. We propose that the inferred first-order dynamics of the presented analog models can provide relevant clues to understand natural complex subduction systems
CitationPeral, M., Kiraly, A., Zlotnik, S., Funiciello, F., Fernandez, M., faccenna, C., Vergés, J. Opposite subduction polarity in adjacent plate segments. "Tectonics", Setembre 2018, vol. 37, núm. 9, p. 3285-3302.
URIhttp://hdl.handle.net/2117/123301
DOI10.1029/2017TC004896
ISSN0278-7407
Publisher versionhttps://agupubs.onlinelibrary.wiley.com/doi/abs/10.1029/2017TC004896
Collections
Share: