A Method for High Level Assessment of the Aeronautical Infrastructure Efficiency 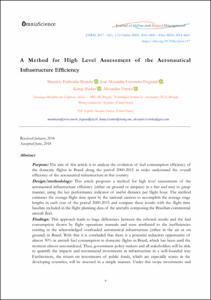 Except where otherwise noted, content on this work is licensed under a Creative Commons license : Attribution-NonCommercial 3.0 Spain
Abstract
Purpose: The aim of this article is to analyze the evolution of fuel consumption efficiency of the domestic flights in Brazil along the period 2000-2015 in order understand the overall efficiency of the aeronautical infrastructure in this country. Design/methodology: This article proposes a method for high level assessments of the aeronautical infrastructure efficiency (either on ground or airspace) in a fast and easy to grasp manner, using the key performance indicator of useful distance per flight hour. The method estimates the average flight time spent by the national carriers to accomplish the average stage lengths in each year of the period 2000-2015 and compare these results with the flight time baseline included in the flight planning data of the aircrafts composing the Brazilian commercial aircraft fleet. Findings: This approach leads to huge differences between the referred results and the fuel consumption shown by flight operations manuals and were attributed to the inefficiencies existing in the acknowledged overloaded aeronautical infrastructure (either in the air or on ground) in Brazil. With that it is concluded that there is a potential reduction opportunity of almost 30% in aircraft fuel consumption in domestic flights in Brazil, which has been until the moment almost unconsidered. Thus, government policy-makers and all stakeholders will be able to quantify the impacts and recommend investments in infrastructure in a well-founded way. Furthermore, the return on investments of public funds, which are especially scarce in the developing countries, will be assessed in a simple manner. Under this scope investments and research on Air Traffic Management (ATM) new technologies and flow management techniques are strongly suggested in order to improve airspace operational efficiency. Originality/value: A new and innovative method for high level assessment of the aeronautical infrastructure efficiency.
Location
1: Unnamed Road - Brasília, DF, 70297-400, Brasil
CitationEmboaba Moreira, M. [et al.]. A Method for High Level Assessment of the Aeronautical Infrastructure Efficiency. "Journal of Airline and Airport Management", Juny 2018, vol. 8, núm. 1, p. 1-12.
URIhttp://hdl.handle.net/2117/123275
DOI10.3926/jairm.117
Collections
Share: