On the solution of Lambert's problem by regularization 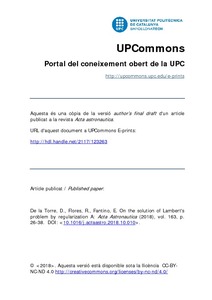 Document typeArticle
Rights accessOpen Access
Abstract
Lambert's problem is the two-point boundary-value problem resulting from a two-body orbital transfer between two position vectors in a given time. It lies at the very heart of several fundamental astrodynamics and space engineering problems and, as such, it has attracted the interest of scientists over centuries. In this work, we revisit the solution of Lambert's problem based on Levi-Civita regularization developed by Carles Simó in 1973. We offer an exhaustive derivation of the theory, including proofs of all the results and the formulae employed, and we extend the algorithm to deal with multi-revolution transfers. Then, after investigating a range of initial guess search techniques and testing different numerical methods to approximate the solution, we propose a procedure in which the initial guess is assigned very efficiently by querying a pre-defined interpolating table. Then, in order to achieve both speed and robustness, we combine Newton-Raphson with safety checks to avoid out of boundary deviations to approximate the solution. We validate the method through several tests and applications, and we assess its convergence and performance. The algorithm presents no singularities, converges in all realistic scenarios and its computational cost is comparable with state of the art algorithms.
CitationDe La Torre, D., Flores Le Roux, R.M., Fantino, E. On the solution of Lambert's problem by regularization. "Acta astronautica", Desembre 2018, vol. 153, p. 26-38.
URIhttp://hdl.handle.net/2117/123263
DOI10.1016/j.actaastro.2018.10.010
ISSN0094-5765
Publisher versionhttps://www.sciencedirect.com/science/article/pii/S0094576518306106
Collections
Share: