Killing many birds with two stones: hypoxia and fibrosis can generate ectopic beats in a human ventricular model 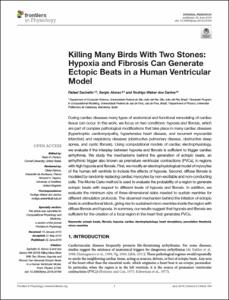 Weber dos Santos, Rodrigo
Document typeArticle
Rights accessOpen Access
Abstract
During cardiac diseases many types of anatomical and functional remodeling of cardiac tissue can occur. In this work, we focus on two conditions: hypoxia and fibrosis, which are part of complex pathological modifications that take place in many cardiac diseases (hypertrophic cardiomyopathy, hypertensive heart disease, and recurrent myocardial infarction) and respiratory diseases (obstructive pulmonary disease, obstructive sleep apnea, and cystic fibrosis). Using computational models of cardiac electrophysiology, we evaluate if the interplay between hypoxia and fibrosis is sufficient to trigger cardiac arrhythmia. We study the mechanisms behind the generation of ectopic beats, an arrhythmic trigger also known as premature ventricular contractions (PVCs), in regions with high hypoxia and fibrosis. First, we modify an electrophysiological model of myocytes of the human left ventricle to include the effects of hypoxia. Second, diffuse fibrosis is modeled by randomly replacing cardiac myocytes by non-excitable and non-conducting cells. The Monte Carlo method is used to evaluate the probability of a region to generate ectopic beats with respect to different levels of hypoxia and fibrosis. In addition, we evaluate the minimum size of three-dimensional slabs needed to sustain reentries for different stimulation protocols. The observed mechanism behind the initiation of ectopic beats is unidirectional block, giving rise to sustained micro-reentries inside the region with diffuse fibrosis and hypoxia. In summary, our results suggest that hypoxia and fibrosis are sufficient for the creation of a focal region in the heart that generates PVCs.
Citationsachetto, R., Alonso, S., Weber, R. Killing many birds with two stones: hypoxia and fibrosis can generate ectopic beats in a human ventricular model. "Frontiers in Physiology", 22 Juny 2018, vol. 9, p. 764-1-764-12.
URIhttp://hdl.handle.net/2117/123239
DOI10.3389/fphys.2018.00764
ISSN1664-042X
Publisher versionhttps://www.ncbi.nlm.nih.gov/pmc/articles/PMC6024351/pdf/fphys-09-00764.pdf
Collections
Share: