Analysis of the torsional mode T(0,1) propagating in a bending pipe 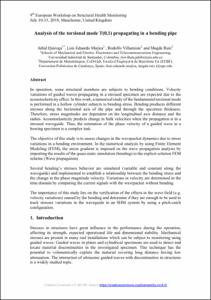 Document typeConference lecture
Rights accessOpen Access
Abstract
In operation, some structural members are subjects to bending conditions. Velocity variations of guided waves propagating in a stressed specimen are expected due to the acoustoelasticity effect. In this work, a numerical study of the fundamental torsional mode is performed in a hollow cylinder subjects to bending stress. Bending produces different stresses along the horizontal axis of the pipe and through the specimen thickness. Therefore, stress magnitudes are dependent on the longitudinal axis distance and the radius. Acoustoelasticity predicts change in bulk velocities when the propagation is in a stressed waveguide. Thus, the estimation of the phase velocity of a guided wave in a bowing specimen is a complex task. The objective of this study is to assess changes in the wavepacket dynamics due to stress variations in a bending environment. In the numerical analysis by using Finite Element Modeling (FEM), the stress gradient is imposed on the wave propagation analysis by importing the results of the quasi-static simulation (bending) to the explicit solution FEM scheme (Wave propagation). Several bending’s stresses behavior are simulated (variable and constant along the waveguide) and implemented to establish a relationship between the bending stress and the change in the phase magnitude velocity. Variations in velocity are determined in the time domain by comparing the current signals with the wavepacket without bending. The importance of this study lies on the verification of the effects in the wave field (e.g. velocity variations) caused by the bending and determine if they are enough to be used to track stresses variations in the waveguide in an SHM system by using a pitch-catch configuration.
CitationQuiroga , J., Mujica, L.E., Villamizar, R., Ruiz, M. Analysis of the torsional mode T(0,1) propagating in a bending pipe. A: European Workshop on Structural Health Monitoring. "EWSHM 2018: 9th European Workshop on Structural Health Monitoring: Manchester, UK: July 10-13, 2018: proceedings book". 2018, p. 1-9.
URIhttp://hdl.handle.net/2117/123075
Collections
Share: