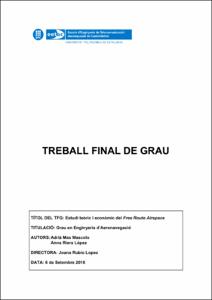 Document typeBachelor thesis
Rights accessOpen Access
Abstract
The current configuration of the European airspace is fragmented, defined by national boundaries that directly affects the efficiency and costs of air navigation. For this reason Eurocontrol started the project of the Single European Sky that promoted the Functional Airspace Blocks (FAB), an initiative that redistributes the airspace without taking into account national bordiers. According to this initiative, Europe is now distributed in nine functional airspace blocks that have allowed the implementation of Free Route Airspace (FRA), a more efficient way of navigating, as it allows crossing an airspace from point to point in a straight line given only one entry point and one exit point. Once we have seen the theoretical aspects of the implementation, the project aims to study the economic savings linked to an airline, in this case Vueling, with the implementation of the FRA. All this will allow us to evaluate what benefits are obtained and how it could be achieved to optimize the company's operations by focusing on obtaining a better performance in the operating areas with FRA nowadays. The final objective then, is to provide economic values of fuel savings and flight time while studying the company's last two months of operation and to conclude to what extent the new airspace design favours air carriers , and specifically, those low cost. Once the study has been completed, we have seen that even though Free Route Airspace is not yet totally implemented and that Vueling does not make an excessive use of it, the savings are quite high, by the order of 400.000 . In general, we want to show the need for a restructuration of the European airspace, which is already under way, and to show not only that air navigation is more efficient and provides an increase in the capacity of the space to be able to manage the future increase in traffic, but also that airlines also benefit from it.
SubjectsAir traffic control, Airspace (International law), Trànsit aeri -- Control, Espai aeri (Dret internacional)
URIhttp://hdl.handle.net/2117/123036
Collections
Share: