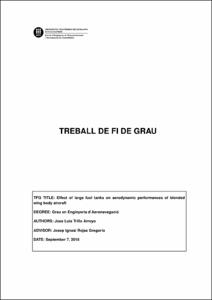 The Green House effect is one of the most important consequences of Green House Gases (GHG) emissions. The transport industry is an important GHG emitter due to its constant use of fossil fuels as energy source. Hence an alternative to the current fossil fuels must be implemented in order to assure the the survival of the different species that inhabit the Earth. This investigation can be summarized as the proposal for the use of hydrogen as the main source of energy in the aviation sector and the study of its impact on aerodynamic and economic performance. The low density of hydrogen generates, as a consequence, the need to use large fuel tanks, which are difficult to integrate in conventional aircrafts.The blended wing body (BWB) aircraft configuration has been proposed as key for the proper integration of hydrogen tanks due to its larger volume and streamlined shape. Several fuel tank integrations have been studied in order to see their impact on aerodynamic and economic behavior. The studied parameters have been calculated with two different methods, which have been compared. The CFD simulation allow us compute the aircraft aerodynamic performances such as the drag and lift coefficients. Furthermore, with conventional aircraft information from the Base of Aircraft Data (BADA), several regresion equations have been obtained, which give us the OEW, MTOW, drag and fuel consumption as a function of aircraft surface. A comparison between the drag obtained from both methods has been done, and the conclusion is that the results deduced from BADA differ from those from CFD due to the higher induced drag of conventional aircrafts. Thus, although computing the parameters from the empirical model (regression equations) results in worst aerodynamic performances, the method can be considered accurate enough. Finally, an analysis of the the several calculated parameters and a comparison with the respective parameters of the current aircrafts has been performed. Although the aerodynamic and economic behavior can be considered as proper, the necessary modifications of airport runways, taxiways, etc., and the difficulties associated with implementation of emergency exits could complicate the commercial success of models similar to those studied in this work. The objectives of the work have been successfully completed because we have been able to see the impact of introducing large fuel tanks on the aerodynamic and economic performance of a BWB, as well as the feasibility of its use.
SubjectsHydrogen as fuel, Renewable energy sources, Hidrogen com a combustiblle, Energies renovables, Efecte d'hivernacle, Gasos d'
URIhttp://hdl.handle.net/2117/123034