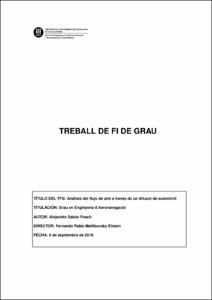 The aim of this study was to optimise a car diffuser in order to reduce fuel consumption and improve grip performance in bends, thus achieving a higher cornering speed. The optimisation has been carried out using the OpenFoam simulation software. The main feature of OpenFoam is to be an open source software, where you can find extensive literature to contrast and support in case of doubt. In addition, this program has allowed us to perform a two-dimensional simulation with the use of a RANS formulation, thus reducing the computational cost. The turbulence model used has been the k-epsilon, due to its easy implementation and being one of the most used. In addition, the boundary layer has been approximated by wall functions allowing only the logarithmic region to be resolved. In the literature it has been observed that there is a design compromise point in the optimization of diffusers. Wanting to minimize resistance or maximize aerodynamic load are the two aspects that have been addressed in all studies to date. Currently, the research line that follows this field is the use of a possible active control that allows to vary the geometry of the diffuser. In our study, it has been observed that an angle of 6 degrees minimizes aerodynamic resistance and one of 10 degrees maximizes the downforce generated. In the case where the downforce is maximized it has been obtained that the consumption of fuel increases in 9.3%, whereas when we minimize the resistance the consumption is reduced in 2.4% sacrificing the capacity to generate aerodynamic load. In addition, it is observed that increase the length of the diffuser increases the coefficient of the aerodynamic forces. Finally, the author's interest in continuing with the research line of this project must be commented, in order to implement an active control in which the effect of the vehicle exhaust gases can also be taken into account.
SubjectsFluid dynamics, Dinàmica de fluids
URIhttp://hdl.handle.net/2117/123030