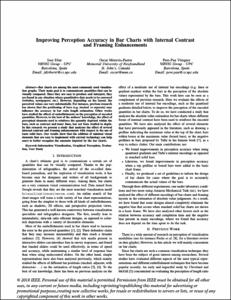 Document typeConference report
PublisherInstitute of Electrical and Electronics Engineers (IEEE)
Rights accessOpen Access
Abstract
Bar charts are among the most commonly used visualization graphs. Their main goal is to communicate quantities that can be visually compared. Since they are easy to produce and interpret, they are found in any situation where quantitative data needs to be conveyed (websites, newspapers, etc.). However, depending on the layout, the perceived values can vary substantially. For instance, previous research has shown that the positioning of bars (e.g. stacked vs separate) may influence the accuracy in bar ratio length estimation. Other works have studied the effects of embellishments on the perception of encoded quantities. However, to the best of the authors’ knowledge, the effect of perceptual elements used to reinforce the quantity depicted within the bars, such as contrast and inner lines, has not been studied in depth. In this research we present a study that analyzes the effect of several internal contrast and framing enhancements with respect to the use of basic solid bars. Our results show that the addition of minimal visual elements that are easy to implement with current technology can help users to better recognize the amounts depicted by the bar charts.
CitationDíaz, J., Meruvia, O., Vázquez, P. Improving perception accuracy in bar charts with internal contrast and framing enhancements. A: International Conference Information Visualisation. "iV 2018, 22nd International Conference Information Visualisation: 10-13 July 2018, Università degli Studi di Salerno, Salerno, Italy". Institute of Electrical and Electronics Engineers (IEEE), 2018, p. 159-168.
URIhttp://hdl.handle.net/2117/122977
DOI10.1109/iV.2018.00037
ISBN978-1-5386-7202-0
Publisher versionhttps://ieeexplore.ieee.org/document/8564155
Collections
Share: