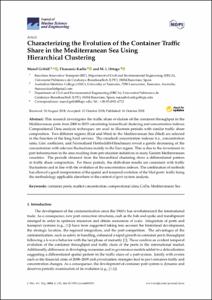 Document typeArticle
Rights accessOpen Access
Abstract
This research investigates the traffic share evolution of the container throughput in the Mediterranean ports from 2000 to 2015 considering hierarchical clustering and concentration indexes. Compositional Data analysis techniques are used to illustrate periods with similar traffic share composition. Two different regions (East and West) in the Mediterranean Sea (Med) are selected in the function of the long haul services. The standard concentration indexes (i.e., concentration ratio, Gini coefficient, and Normalized Herfindahl-Hirschman) reveal a gentle decreasing of the concentration with relevant fluctuations mainly in the East region. This is due to the investment in port infrastructure in the area resulting from privatization initiatives in many Eastern Mediterranean countries. The periods obtained from the hierarchical clustering show a differentiated pattern in traffic share composition. For these periods, the shift-share results are consistent with traffic fluctuations and in line with the evolution of the concentration indexes. The combination of methods has allowed a good interpretation of the spatial and temporal evolution of the Med ports’ traffic being the methodology applicable elsewhere in the context of port system analysis.
CitationGrifoll, M., Karlis, T., Ortego, M.I. Characterizing the evolution of the container traffic share in the mediterranean sea using hierarchical clustering. "Journal of marine science and engineering", Desembre 2018, vol. 6, núm. 4, p. 1-14.
URIhttp://hdl.handle.net/2117/122840
DOI10.3390/jmse6040121
ISSN2077-1312
Publisher versionhttps://www.mdpi.com/2077-1312/6/4/121
Collections
Share: