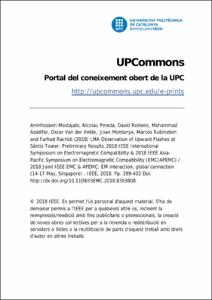 Rubinstein, M.
Rachidi, F
Document typeConference report
Rights accessOpen Access
Abstract
Lightning striking tall towers is mainly of the upward lightning type, which is characterized by the absence of a first return stroke and the presence of an initial continuous current (ICC) with or without superimposed pulses. The Säntis Tower is 124 m tall and it is located on the top of the Säntis Mountain (2502 m ASL) in the eastern Swiss Alps. The Tower location exhibited the highest lightning flash density in Switzerland during the period from 1999 to 2006. The Tower was instrumented in May 2010 for the measurement of lightning current parameters. In order to complement these data, a Lightning Mapping Array (LMA) was deployed around the Tower during the Summer 2017. The LMA system locates the sources of radio emissions in the very high frequency range (VHF, 60-66 MHz) in three dimensions by a time-of-arrival analysis. The LMA system allows detailed analysis of individual flashes, through the mapping of the lightning channels in the cloud with sufficient time resolution and spatial precision to locate the origin and propagation of each flash. With the help of the LMA, we intend to further investigate the initiation and propagation characteristics of upward lightning emerging from the Tower. From June 29 to August 15, 2017, 33 upward flashes initiated from the Säntis tower were registered by the LMA network. These records are the first set of VHF total lightning mapping obtained in Switzerland. Preliminary results of the campaign are presented in this paper. © 2018 IEEE.
Location
1: Säntis, 9107 Hundwil, Suïssa
CitationMostajabi, A., Pineda, N., Romero, D., Azadifar, M., Van Der Velde, O., Montanya, J., Rubinstein, M., Rachidi, F. LMA observation of upward flashes at Säntis Tower: preliminary result. A: European Symposium on Electromagnetic Compatibility. "2018 IEEE International Symposium on Electromagnetic Compatibility and 2018 IEEE Asia-Pacific Symposium on Electromagnetic Compatibility, EMC/APEMC 2018". 2018, p. 399-402.
URIhttp://hdl.handle.net/2117/122757
DOI10.1109/ISEMC.2018.8393808
ISBN978-150905997-3
Publisher versionhttps://ieeexplore-ieee-org.recursos.biblioteca.upc.edu/document/8393808
Collections
Share: