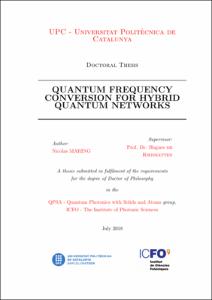 Show full item record
Maring, Nicolas
Tutor / directorDe Riedmatten, Hugues
Chair / Department / Institute
Universitat Politècnica de Catalunya. Institut de Ciències Fotòniques
Document typeDoctoral thesis
PublisherUniversitat Politècnica de Catalunya
Rights accessOpen Access
Abstract
The ability to control the optical frequency of quantum state carriers (i.e. photons) is an important functionality for future quantum networks. It allows all matter quantum systems - nodes of the network - to be compatible with the telecommunication C-band, therefore enabling long distance fiber quantum communication between them. It also allows dissimilar nodes to be connected with each other, thus resulting in heterogeneous networks that can take advantage of the different capabilities offered by the diversity of its constituents. Quantum memories are one of the building blocks of a quantum network, enabling the storage of quantum states of light and the entanglement distribution over long distances. In our group, two different types of memories are investigated: a cold atomic ensemble and an ion-doped crystal. In this thesis I investigate the quantum frequency conversion of narrow-band photons, emitted or absorbed by optical quantum memories, with two different objectives: the first one is to connect quantum memories emitting or absorbing visible single photons with the telecommunication wavelengths, where fiber transmission loss is minimum. The second and main goal is to study the compatibility between disparate quantum nodes, emitting or absorbing photons at different wavelengths. More precisely the objective is to achieve a quantum connection between the two optical memories studied using quantum frequency conversion techniques. The main core of this work is the quantum frequency conversion interface that bridges the gap between the cold ensemble of Rubidium atoms, emitting photons at 780nm, and the Praseodymium ion doped crystal, absorbing photons at 606nm. This interface is composed of two different frequency conversion devices, where a cascaded conversions takes place: the first one converts 780nm photons to the telecommunication C-band, and the second one converts them back to visible, at 606nm. This comes with several challenges such as conversion efficiency, phase stability and parasitic noise reduction, which are important considerations to show the conservation of quantum behaviors through the conversion process. This work can be divided in three parts. In a first one, we built a quantum frequency conversion interface between 606nm and the C-band wavelength, capable of both up and down-conversion of single photon level light. We also characterized the noise processes involved in this specific conversion. In the down-conversion case we showed that memory compatible heralded single photons emitted from a photon pair source preserve their non-classical properties through the conversion process. In the up-conversion case, we showed the storage of converted telecom photons in the praseodymium doped crystal, and their retrieval with high signal to noise ratio. The second part of the work was devoted to the conversion of photons from an emissive Rubidium atomic quantum memory to the telecom C band. In this work we converted the heralding photons from the atomic ensemble and measured non-classical correlations between a stored excitation and a C-band photon, necessary for quantum repeater applications. In the last part of the thesis, we setup the full frequency conversion interface and showed that heralded photons emitted by the atomic ensemble are converted, stored in the solid state memory and retrieved with high signal to noise ratio. We demonstrated that a single collective excitation stored in the atomic ensemble is transfered to the crystal by mean of a single photon at telecom wavelength. We also showed time-bin qubit transfer between the two quantum memories. This work represents the first proof of principle of a photonic quantum connection between disparate quantum memory nodes. The results presented in this thesis pave the way towards the realization of modular and hybrid quantum networks.
CitationMaring, N. Quantum frecuency conversion for hybrid quantum networks. Tesi doctoral, UPC, Institut de Ciències Fotòniques, 2018. Available at: <http://hdl.handle.net/2117/122702>
URIhttp://hdl.handle.net/2117/122702
Collections
Share:

Except where otherwise noted, content on this work is licensed under a Creative Commons license : Attribution-NonCommercial-ShareAlike 4.0 Generic