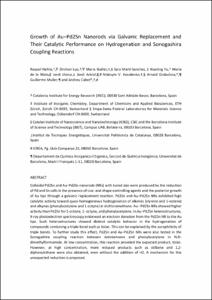 Document typeArticle
Rights accessOpen Access
All rights reserved. This work is protected by the corresponding intellectual and industrial property rights. Without prejudice to any existing legal exemptions, reproduction, distribution, public communication or transformation of this work are prohibited without permission of the copyright holder
Abstract
Colloidal Pd2Sn and Au–Pd2Sn nanorods (NRs) with tuned size were produced by the reduction of Pd and Sn salts in the presence of size- and shape-controlling agents and the posterior growth of Au tips through a galvanic replacement reaction. Pd2Sn and Au–Pd2Sn NRs exhibited high catalytic activity toward quasi-homogeneous hydrogenation of alkenes (styrene and 1-octene) and alkynes (phenylacetylene and 1-octyne) in dichloromethane. Au–Pd2Sn NRs showed higher activity than Pd2Sn for 1-octene, 1-octyne, and phenylacetylene. In Au–Pd2Sn heterostructures, X-ray photoelectron spectroscopy evidenced an electron donation from the Pd2Sn NR to the Au tips. Such heterostructures showed distinct catalytic behavior in the hydrogenation of compounds containing a triple bond such as tolan. This can be explained by the aurophilicity of triple bonds. To further study this effect, Pd2Sn and Au–Pd2Sn NRs were also tested in the Sonogashira coupling reaction between iodobenzene and phenylacetylene in N,N-dimethylformamide. At low concentration, this reaction provided the expected product, tolan. However, at high concentration, more reduced products such as stilbene and 1,2-diphenylethane were also obtained, even without the addition of H2. A mechanism for this unexpected reduction is proposed.
CitationNafria, R., Luo, Z., Ibañez, M., Llorca, J. Growth of Au-Pd2Sn nanorods via galvanic replacement and their catalytic performance on hydrogenation and sonogashira coupling reactions. "Langmuir", 11 Setembre 2018, vol. 34, núm. 36, p. 10634-10643.
URIhttp://hdl.handle.net/2117/122664
DOI10.1021/acs.langmuir.8b02023
ISSN0743-7463
Publisher versionhttps://pubs.acs.org/doi/10.1021/acs.langmuir.8b02023
Collections
Share: